It's almost December. Time to release a new version of Blaise!

This version includes the second version of Manipula, which is now production-ready, the first version of CATI, Multi-mode support, User-defined special attributes, and a few smaller additions. Furthermore, we have worked on performance enhancements, improved the iOS and Android apps, and solved many issues that were reported by our users.

The second version of Manipula is now available. In this version we have implemented support for AUTOREAD=NO, update files, temporary files, variable meta and it is now possible to define a datamodel in the uses section of your manipula setup. 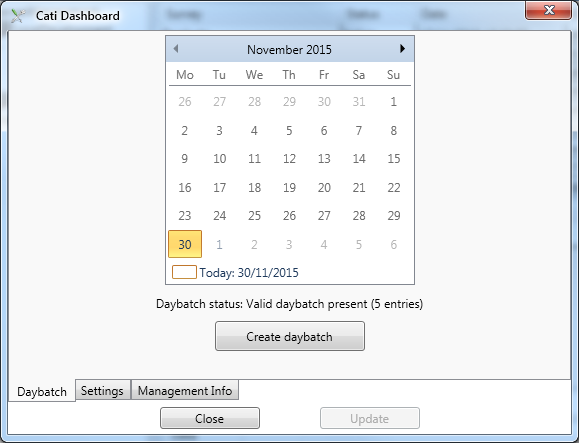 This release offers a first step toward a version of CATI (Telephone Interviewing) that offers functionality comparable to Blaise 4 CATI. In this release the focus is on the functionality that is needed for auto delivery of a case to an interviewer. We have implemented the CATI specification, daybatch creation and the call scheduler. We also offer a first version of a CATI management dashboard. We have shipped an example with the system that shows how Blaise 5 CATI works.

Blaise 5 now truly supports multi-mode questionnaires, by adding the modes keyword to the language. In your datamodel, you define the modes in which this questionnaire can run. Every mode can have its own set of allowed special answers. Based on the mode, different routing is possible as well. Also, different texts are possible in different modes (e.g. question texts, answer options, etc.)

It is now possible to preview the page you are designing in a browser. When you switch to the Layout view of a datamodel, you will see a preview icon appear in the list of shortcut icons on the top of the Control Centre. Using that icon, you can preview the current page in any of the browsers installed on your system.

The Session Viewer has been extended with functionality to see the state of a particular session. You can select fields to watch, and you can compare two states to see what was changed since the last update.

Support for a custom relational database for session and audit trail data.

The session and/or audit trail data can now be stored in a relational database of your choice. The default remains a SQLite database. You can choose one session database and one audit trail database, and these will be used by all surveys.