So far, the emphasis of development has mainly centered on the layout, but it is increasingly moving into the next stage: case management. 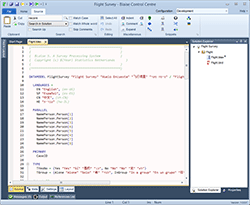 Blaise 5 has disconnected layout from content. The data model is still the same, but the layout section is no longer used. Instead, a Resource Editor (similar to the modelib editor in Blaise 4) is used to create a Resource Database. This separate file can be reused over multiple questionnaires. The values and properties as set in that database can be changed for every separate question in the data model. These values and properties can also differ between modes (layout set groups), styles or even languages, making Blaise 5 a very flexible tool. It is possible to create a house-style for your organization. You can also still add text fill controls in the data model.